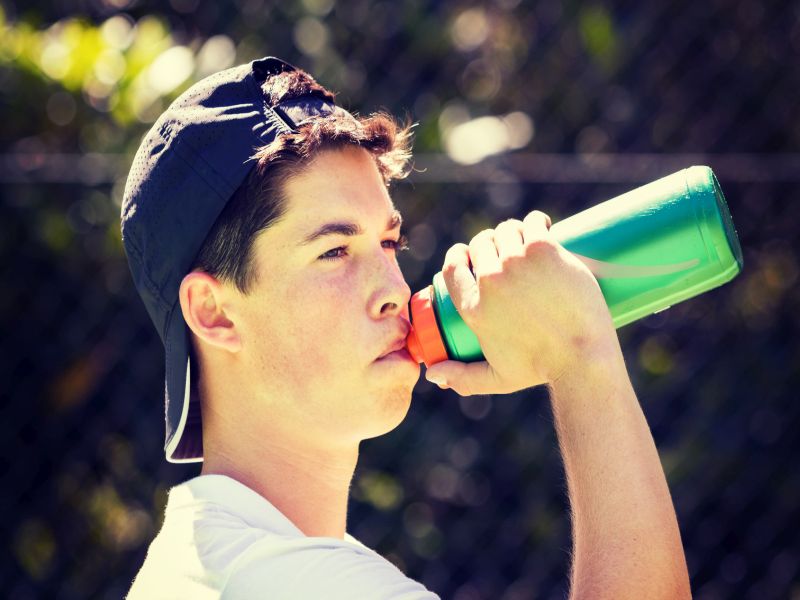 Many U.S. Kids Don't Drink Enough Water, and Obesity May Be the Result

On any given day, 1 in 5 American youngsters don't drink any water at all, a new survey shows.

And those who don't end up consuming almost twice as many calories from sugar-sweetened beverages.

That, investigators warn, translates into an extra 100 calories per day, which over time can raise the risk for becoming overweight or obese.

"Drinking water is the healthiest beverage to drink," said study author Asher Rosinger, director of the Water, Health and Nutrition Laboratory at Pennsylvania State University. "Water is an essential nutrient that is critical to proper physiological and cognitive functioning."

By contrast, sugary drinks "are problematic because they have been linked to many negative health conditions, such as weight gain, dental caries [cavities], and type 2 diabetes," said Rosinger. He noted that current guidelines recommend limiting daily intake of added sugars to less than 10% of all calories consumed.

"Kids should drink water every day, and it should be the first option [parents] go to when their kids are thirsty," Rosinger said.

In the study, data was collected from the U.S. National Health and Nutrition Examination Surveys between 2011 and 2012 and between 2015 and 2016.

About 8,400 children (aged 2 to 19) reported whether they drank water each day (although amounts were not quantified), and how much of sugar-sweetened beverages they routinely consumed.

Among the 1 in 5 who didn't drink any water daily, sugared-drink calories totaled 200, on average, compared with 100 calories a day among water drinkers.

Regardless, are such relatively low amounts of excess calories really a big deal? Yes, say investigators, who point out that taking in an extra 3,500 calories means packing on an extra pound. That breaks down to just a little more than a month of 100 extra calories per day.

Rosinger did note that sugary drink consumption among American children has dropped over the last 15 years. But he added that "there are still pockets and sub-populations that have high consumption levels. [So] it's critical to identify which kids are particularly at risk for high sugar-sweetened beverage intake, since this can lead to these negative health effects."

On that front, Rosinger noted that water insecurity due to contamination "is a growing problem in the U.S., so we need to keep that in mind as important context, especially when it comes to parents who may be giving their kids soda or juice because they distrust the water. Therefore, it's critical to ensure that everyone has access to safe, clean water."

The findings were published April 22 in the journal JAMA Pediatrics.

Lona Sandon is program director in the department of clinical nutrition at the University of Texas Southwestern Medical Center at Dallas. She said the findings "confirm what I have seen in practice: If someone is not drinking water, they are drinking something else, likely soft drinks or other sugary drinks." She was not involved with the study.

Sandon's advice to parents? "Provide water and low-fat plain milk at the table. Keep flavored milk only for special occasions. Avoid purchasing soft drinks or other fruit juice-type drinks that are laden with added sugar. Try no-calorie, flavored seltzer water instead. Make a no-soft drink or other sugary drinks rule in the household. Save them for special occasions. Keep 100% fruit juice to 1 cup per day. Keep sports drinks for sports, not with meals, and only if the child will be exercising for more than an hour."

And dump the energy drinks, Sandon concluded. "Kids do not need them."