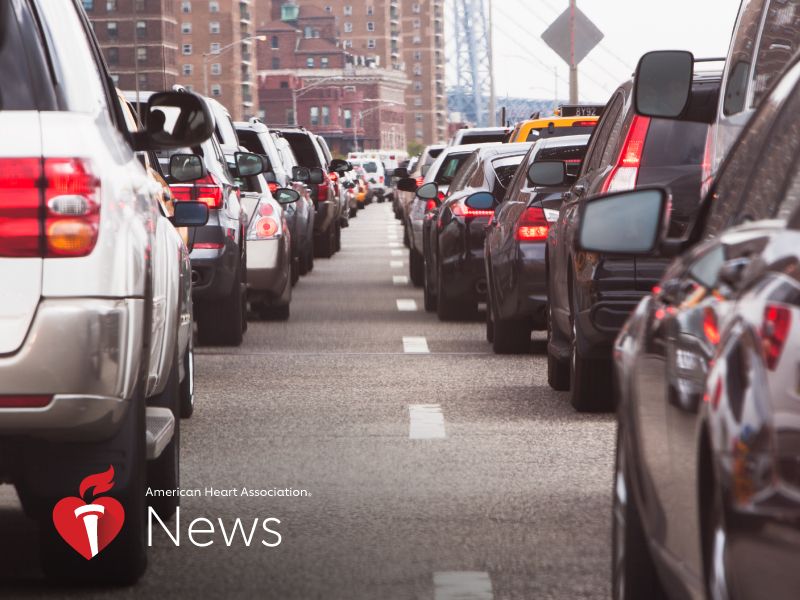 Navigating through congested road traffic is enough to make even the most laid-back people lose their cool. As it turns out, just the sound of road noise may increase the risk of developing high blood pressure and diabetes.

That was the finding of researchers who conducted a study of more than 1 million long-term Toronto residents between ages 35 and 100 over a 15-year period.

The risks remained heightened even after adjusting for exposure to air pollution and socioeconomic factors, and the link was stronger in women and younger people.

"This may have something to do with people's sensitivity to noise exposure," said the study's senior author Hong Chen, a research scientist with Health Canada and an adjunct scientist with the research institute ICES in Ontario. "For example, age-related hearing loss may play a role, as typically it is more difficult for relatively older individuals to detect noise."

The study, published Monday in the Journal of the American Heart Association, is part of a growing body of research about the possible negative health impacts of traffic noise.

A 2013 Environmental Health Perspectives study of Danish people also found each 10-decibel increase in road traffic noise was associated with an increased risk in diabetes.

And in 2017, researchers reported in Environmental Research a link between exposure to road, rail and airplane noise and severe hypertension diagnoses that led to heart disease.

These findings are important for a variety of reasons, said Dr. Richard C. Becker, a professor of medicine and director of the University of Cincinnati Heart, Lung & Vascular Institute. He was not involved in the new study.

Becker pointed out that people all around the world are increasingly living in urban areas.

Indeed, according to the United Nations, the world's urban population rose from 751 million in 1950 to 4.2 billion in 2018. Today more than half of people worldwide live in urban areas, a figure the U.N. projects will rise to 68% by 2055.

He suggested people should be aware of the noise levels when looking for a place to live, and those living in a noisy area minimize their exposure by installing double-paned windows, adding sound-deadening insulation or using earplugs or noise-canceling headphones.

People don't even have to be aware of the noise for it to impact their health, Becker said, pointing out that people who sleep through loud sirens and other urban noises can still experience a stress response.

"It could be that critical parts of the sleep cycle are disturbed or that there are subcortical reflexes to something that the brain is interpreting as potentially harmful," he said.

Chen said additional research is needed to clarify the health effects of noise, particularly when coupled with air pollution, and to better understand the effectiveness of noise mitigation measures in a real-world setting.

"Public health efforts to reduce the exposure of noise to residents may foster a quality residential noise environment, thereby contributing to better health and well-being and a healthier city overall," Chen said.