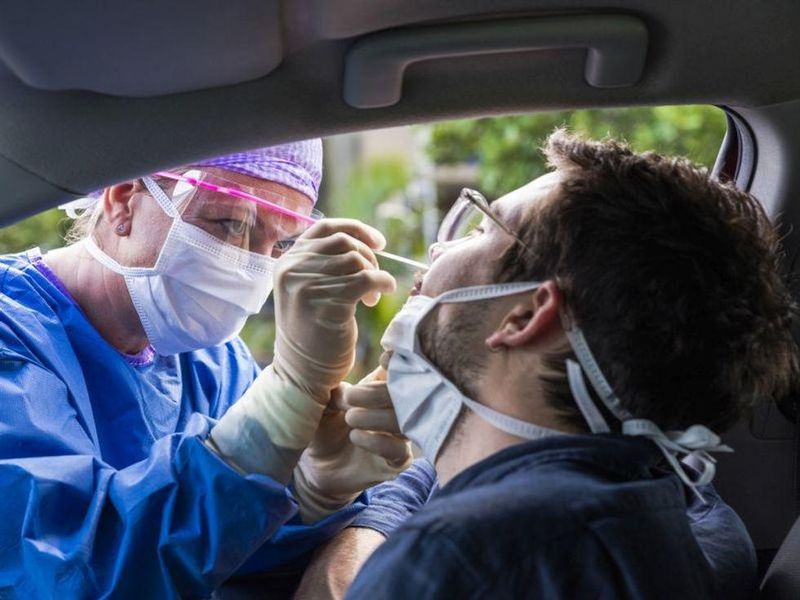 New COVID Cases Double in U.S. in Past Three Weeks

New coronavirus infections are once again climbing in the United States, driven by the highly contagious Delta variant, lingering vaccine resistance and Fourth of July celebrations.

Over the past three weeks, new cases per day have doubled, with data from Johns Hopkins showing that confirmed infections climbed to an average of about 23,600 a day on Monday, up from 11,300 on June 23. All but two states -- Maine and South Dakota -- have reported that case numbers have gone up over the past two weeks.

"It is certainly no coincidence that we are looking at exactly the time that we would expect cases to be occurring after the July Fourth weekend," Dr. Bill Powderly, co-director of the infectious disease division at Washington University's School of Medicine in St. Louis, told the Associated Press.

Not surprisingly, the five states with the biggest two-week jump in cases per capita all had lower vaccination rates: Missouri, 45.9%; Arkansas, 43%; Nevada, 50.9%; Louisiana, 39.2%; and Utah, 49.5%, the AP reported. Nationally, 55.6% of all Americans have received at least one COVID-19 shot, according to the U.S. Centers for Disease Control and Prevention.

Even with the latest surge, new coronavirus case counts don't come close to nearing their peak of a quarter-million per day in January. Deaths are running at under 260 per day, on average, after topping out at more than 3,400 over the winter -- a graphic illustration of the power of vaccines to prevent serious illness and death in those who do become infected, the AP said.

As cases climb, health authorities in places such as Los Angeles County and St. Louis are begging even the fully vaccinated to don their masks in public once more. And Chicago officials announced Tuesday that unvaccinated travelers from Missouri and Arkansas must either quarantine for 10 days or have a negative COVID-19 test, the AP reported.

In Mississippi, which ranks lowest nationally for vaccinations, state officials are recommending that people 65 and older and those with chronic underlying conditions stay away from large indoor gatherings because of a 150% rise in hospitalizations over the past three weeks, the AP reported.

In Louisiana, which also has one of the nation's lowest vaccination rates, New Orleans officials said Tuesday that they are likely to extend social distancing measures in place at large sporting and entertainment events until the fall. Those measures include mask mandates or requirements that attendees be vaccinated or have a negative COVID-19 test. State health officials said cases of the coronavirus are surging, largely among the unvaccinated, the AP reported.

But many states are weary of the restrictions.

Dr. James Lawler, a leader of the Global Center for Health Security at the University of Nebraska Medical Center in Omaha, told the AP that most of the places seeing higher rates of new cases "are exactly the areas of the country that don't want to do any of these things."

But, "the descriptions from regions of the world where the Delta variant has taken hold and become the predominant virus are pictures of ICUs full of 30-year-olds. That's what the critical care doctors describe and that's what's coming to the U.S.," Lawler said. "I think people have no clue what's about to hit us."

Pfizer made its case for quick approval of a third booster shot of its coronavirus vaccine during a meeting with the country's top scientists and federal regulators during a meeting on Monday.

The online meeting, convened by the U.S. Department of Health and Human Services (HHS), came the same day that Israel started administering third doses of the Pfizer vaccine to heart transplant patients and others with compromised immune systems. Still, officials said after the meeting that more data would be needed before regulators could determine whether booster shots were necessary, The New York Times reported.

"It was an interesting meeting. They shared their data. There wasn't anything resembling a decision," Dr. Anthony Fauci told theTimes. "This is just one piece of a much bigger puzzle, and it's one part of the data, so there isn't a question of a convincing case one way or the other."

Pfizer spokeswoman Amy Rose said in a statement, "We had a productive meeting with U.S. public health officials on the elements of our research program and the preliminary booster data."

The HHS issued its own statement on the administration's stance after the meeting. "At this time, fully vaccinated Americans do not need a booster shot," it said.

The latest developments highlight the intense debate about whether booster shots are needed in the United States, at what point and for whom. Many American experts, including Fauci, have said there isn't enough evidence yet to prove that boosters are necessary. But some suggest Israel's move may foreshadow a U.S. government decision to at least recommend them for the vulnerable.

The final decision on booster shots will rely in part on real-world data gathered by the U.S. Centers for Disease Control and Prevention about breakthrough infections in vaccinated people that cause serious disease or hospitalization, several officials said after the meeting, the Times reported.

If booster shots are recommended, they might first go to nursing home residents who received their vaccines in late 2020 or early 2021, while elderly people who received their first shots in the spring might have a longer wait, the Times said.

"At this point, the most important booster we need is to get people vaccinated," Dr. Carlos del Rio, an infectious disease expert at Emory University in Atlanta, told the Times. The booster doses in Israel, he added, "will help us answer some questions, but at the end of the day I don't agree with what they're doing. I think it's awfully premature."

Monday's high-level meeting was prompted by Pfizer's announcement last week that it is developing a version of its vaccine that targets the Delta variant, and that there have been promising results in studies of people who received a third dose of the original vaccine six months after the second shot, the Times reported.