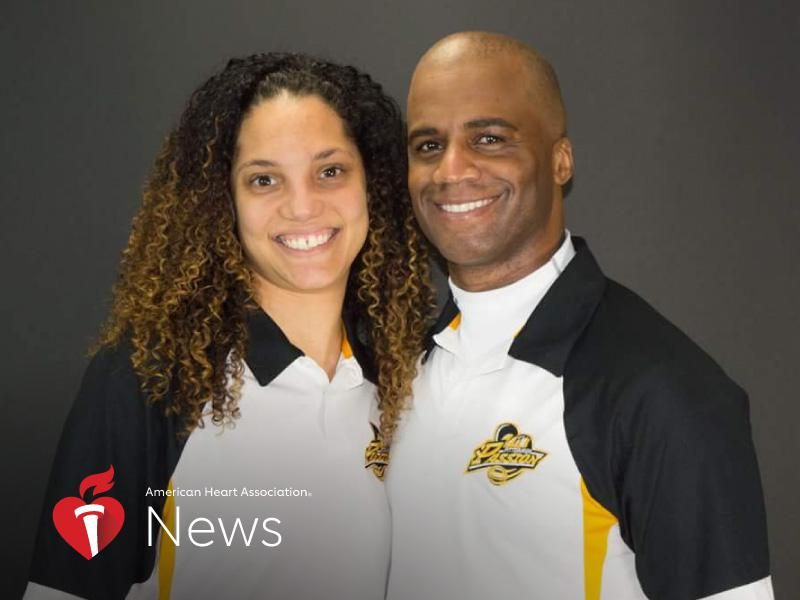 AHA News: She Retired From Playing Football at 41, Had Heart Attack at 43

Throughout every stage of her life, Tammy Spencer Bey has defined herself as an athlete.

She played softball from a young age through high school. In college, Tammy was on a flag football team.

She continued exercising while working full-time, pursuing a master's degree and raising three girls as a single mother.

When her daughters were older, Tammy could finally do what she'd always dreamed of -- play tackle football.

In 2009, Tammy joined the Pittsburgh Passion as a wide receiver. The franchise is part of the Women's Football Alliance, a professional full-contact league.

"I love the game and I love that we were able to play a sport that's dominated by men," she said. "When you put those pads on and you're playing against other players and hitting and getting tackled, I can't describe the rush."

Tammy retired from the squad in 2014, when she was 41. She could feel her age and worried that any injuries would take longer to heal. Plus, she'd just gotten married.

But she didn't give up football or the Passion. She and her husband, Barata Bey, started coaching for the team. Tammy also played in a softball league and walked regularly.

In the fall of 2016, while at her job in the back office of a bank, Tammy came back from lunch and started sweating profusely. Maybe it was indigestion, she thought.

She took three antacid tablets and stationed herself in front of a fan to cool down. Her clothes were getting damp.

Suddenly she felt totally exhausted, like she could sleep on the spot.

"You look terrible," a co-worker said. "Something's not right. I think we should call 911."

"If you don't at least call your husband, I'm calling 911," her colleague said.

Finally, Tammy called Barata and described how she felt.

"Why are you even at work?" he asked.

By the time she arrived at the hospital, Tammy felt like her head was going to explode. She also had tightness in her left armpit and felt nauseous.

"Something's going on with your heart," a doctor told her after several hours of testing.

The next morning, doctors performed a cardiac catheterization procedure to get a better look inside her heart.

"Ms. Bey, we've found the culprit," a doctor said. "Your right coronary artery is fully blocked. We're going to put in a stent to clear the blockage and you'll be out of here in 25 minutes."

Doctors told her the only likely cause was family history. Tammy, who is adopted, has no information about the health history of her birth parents.

As she was being wheeled back into her hospital room, Barata looked up.

"Wow, Tammy, your color is back," he said. "I didn't realize how gray you were."

Tammy felt better immediately. Her headache was gone. She'd stopped sweating. No tightness in her armpit. No nausea.

But her mind was in turmoil.

"At first I kept beating up on myself," she said. "Was it because I like fries and sweet tea after practice?"

Intellectually she knew the blockage had developed over time, but she also vowed to make every positive change she could.

She started with eight weeks of cardiac rehabilitation.

"When they first put me on the treadmill to see where I was, and I couldn't run, that really hit me," she said. "I needed to get back to where I was prior to the heart attack."

Within months, Tammy was running and lifting weights. She started playing league softball a year later and started coaching a year after that, in 2018, sometimes even filling in for absent players.

Although she was already eating well, she cut out red meat and bread and added more fruits and vegetables to her diet. She's been able to reduce her daily medications from five to three and lower the dosages.

"We're a team in it, and I can really feel the benefit," said Barata, who works to manage his cholesterol.

A year after her heart attack, Tammy organized a health summit at her church. Her target audience was Black women. She wanted them to know that while 44% of women overall have cardiovascular disease, 59% of Black women are affected, according to American Heart Association statistics.

"I'm passionate about bringing awareness to heart disease and stroke," Tammy said. "Especially in the Black community, as we need to be aware of the health disparities, aware of the food we're eating and be proactive about health and exercise."

Tammy said the heart attack made her more grateful and motivated.

"I am more joyful, I live better, I eat better," she said. "I am a testimony of a woman who had a heart attack, and it didn't stop me from living the life I wanted to live. If I can do it, you can do it too. You can recover."

Barata said his wife has always inspired others, and even more so now.

"Tam's always been a blessing to everyone that knows her," he said. "But the heart attack has taken her care for other human beings to a higher level."