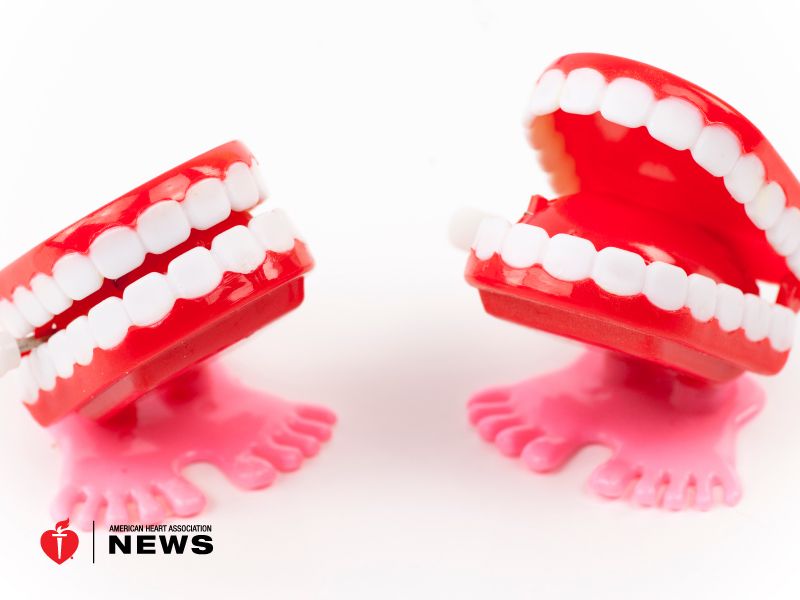 AHA: Healthy Teeth Can Mean a Lot More Than a Pretty Smile

How your teeth are faring as you age can also indicate how your heart is doing.

The idea of oral and heart health being connected has been proposed for more than a century.

Numerous studies have looked at how oral health affects overall health, and some have found an impact. One study showed periodontal disease is associated with atherosclerotic vascular disease and may be an early warning sign of diabetes. Another found gum disease and fewer teeth may be associated with an increased risk of ischemic stroke.

Ongoing preliminary research is now finding that how your teeth fare as you age can indicate how your heart is doing.

Previous research looked at cumulative tooth loss and included teeth lost in childhood and teen years due to cavities, trauma and even braces, according to researcher Dr. Lu Qi, professor of epidemiology at Tulane University.

In the ongoing research, Qi and his colleagues analyzed large studies of adults ages 45-69 who did not exhibit cardiovascular disease and self-reported the number of teeth they had. In a follow-up questionnaire, study participants reported recent tooth loss during an eight-year period. Researchers followed an incidence of cardiovascular disease among people with no tooth loss, one tooth lost and two or more teeth lost over 12 to 18 years.

Researchers found that losing two or more teeth in middle age is associated with increased risk of cardiovascular disease.

"The mouth can be a good warning signpost," said Dr. Ann Bolger, professor of medicine emeritus at the University of California, San Francisco, who was not involved in the new research. "People with periodontitis often have risk factors that not only put their mouth at risk, but their heart and blood vessels, too. But whether one causes the other has not actually been shown."

In the study, presented this month at the American Heart Association's Epidemiology and Lifestyle conference, people with 25 to 32 natural teeth at the start who lost two or more teeth had a 23 percent increased risk of cardiovascular disease. Those with fewer than 17 of their own teeth at the start of the study had a 25 percent increased risk. There was no notable increase for participants who reported losing only one tooth.

The increased risk occurred regardless of other cardiovascular risk factors, such as high blood pressure, high cholesterol or diabetes, according to Qi.

"Some reasons for the increased risk may include inflammation, modifying dietary intakes or changing bacterial compositions in the mouth or gastrointestinal systems," he said.

Half of American adults age 30 and older have periodontal disease, according to the Centers for Disease Control and Prevention. On average, U.S. adults ages 35-64 are missing seven to 10 of their permanent 32 teeth, including wisdom teeth, according to the National Institute of Dental Craniofacial Research.

Qi said the findings suggest that recent loss of two or more teeth is associated with increased risk of cardiovascular disease, regardless of the number of natural teeth a person has as a middle-age adult.