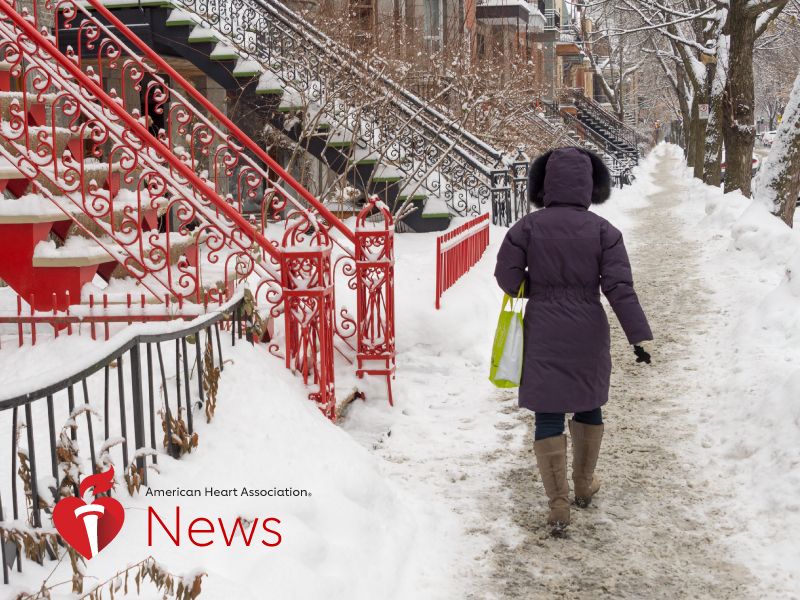 AHA News: Cold Heart Facts: Why You Need to Watch Out in Winter

When Arctic weather is on the way, forecasters often alert you to protect your pets or watch out on the roads. Perhaps they also should warn you about your heart.

Winter cold and other seasonal factors raise the risk of heart attacks and more. It's an issue whether you're in frigid Alaska or sunny California.

Dr. Robert A. Kloner has worked on studies showing cardiac deaths begin to climb around Thanksgiving, peak early in the year, then decrease as warmer weather returns. He is chief science officer of the Huntington Medical Research Institute and a professor of medicine at the University of Southern California in Los Angeles.

A 2015 study he worked on showed death rates from circulatory problems, coronary heart disease and heart attacks all rose as temperatures fell. Every 1-degree Celsius drop in temperature (that's 1.8 degrees Fahrenheit) came with a 0.49% increase in deaths from all causes. Other studies have shown that when temperatures go down, strokes increase.

Many factors are at work, Kloner said. Cold makes arteries constrict. That can decrease blood flow and delivery of oxygen. Cold also tends to increase the formation of blood clots. Winter also is flu season, and studies have shown an increase in heart attacks shortly after people get the flu.

Cold-weather months also bring holidays that can stress people out, and the festivities can cause them to overindulge, said Kloner, whose work helped uncover a spike in cardiac deaths on Christmas and New Year's Day.

Another seasonal factor is the lack of sunshine, which might dissuade people from exercising. Wood-burning fireplaces produce air pollution that can hurt the lungs and heart. Also, he said, "When it's dark, people tend to be more depressed. We know that there's a correlation between emotional upset, depression and cardiac disease."

Then there's the particular risk of snow shoveling.

Dr. Nathalie Auger of the University of Montreal Hospital Research Center led a study showing that in Quebec, the more it snowed, the more men had heart attacks. Researchers suspect shoveling snow was the link.

"It's quite difficult physical activity," she said. "It can happen quite suddenly at the beginning of the season."

Kloner said shoveling is a risk particularly for people who have heart disease. Trudging out in the snow increases oxygen demand at the same time your arteries are tightening up in the cold. "It's sort of a double-whammy."

Auger said climate change, and the increase in extreme weather it brings, will mean more people need to be on alert.

To protect the heart in the cold, both doctors recommend common-sense measures such as eating a healthy diet and avoiding smoking. "But also, in the cold weather, especially if you have known coronary artery disease – stay warm," Kloner said. "Try to bundle up."

People who aren't in great shape need to be extra careful about shoveling, Auger said. Use a snow blower or hire someone.

Sue Gaston of Anchorage, Alaska, knows about the dangers firsthand.

In January 2017, she'd come in from shoveling her walk, twice, during a blizzard. She was an active person, of proud Norwegian heritage.

"We're just kind of … worker bees," she said. "And when the snow needs shoveling, you go out and you shovel it."

But that time, something felt different. She came inside and felt tired, sore, clammy and nauseated – and realized she was having a heart attack.

She was able to call for help and soon was at a hospital, where doctors inserted a stent to open a blocked heart artery.

These days, at 66, she's a little more sensitive to the cold, and conscious about working too hard. "I'm not quite as much in a rush and not quite as much pushing like I might have in the past." And she gets help with shoveling.

She's also full of gratitude, she said. As she spoke, she was at her son's house awaiting the arrival of her first grandchild.

"And it doesn't hurt that I'm sitting in the sun on a lawn chair in Arizona by the pool, either."