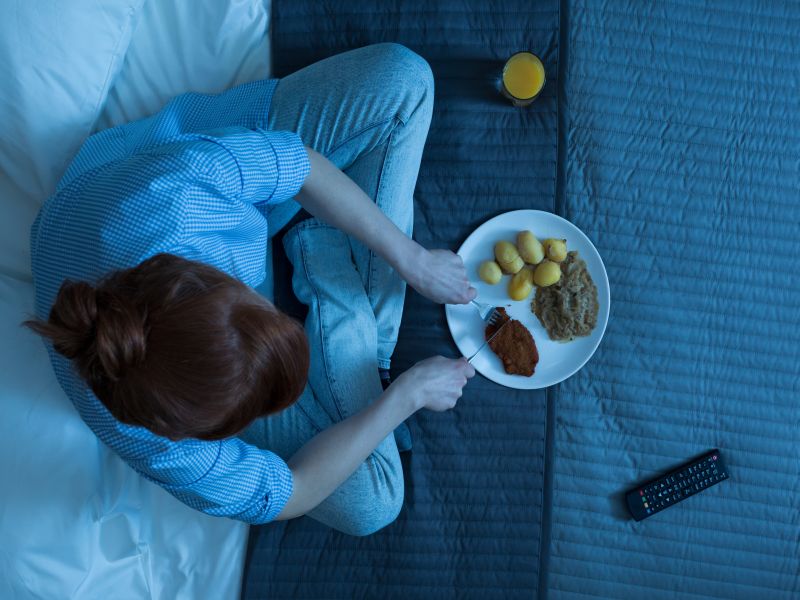 Eating in the Evening Could Be Bad for Your Health

To get a handle on your eating habits, keep a close eye on the clock, researchers suggest.

Consuming most of your daily calories in the evening is associated with a less nutritious diet and higher calorie intake, a new study shows.

Unfortunately, hunger pangs are often strongest later in the day. And this pattern could influence both the type and amount of food we eat, the study authors warned.

To learn more, the investigators analyzed data from nearly 1,200 adults who took part in the U.K. National Diet and Nutrition Survey between 2012 and 2017.

Overall, eating in the evening accounted for nearly 40% of daily calorie intake, according to the new report.

For the study, adults were placed in four groups based on the percentage of calories consumed after 6 p.m., with the highest being more than 48.6% and the lowest less than 31.4%.

The study findings were scheduled for presentation Tuesday at an online meeting of the European and International Congress on Obesity. Research presented at meetings should be considered preliminary until published in a peer-reviewed journal.

"Timing of energy intake may be an important modifiable behavior to consider in future nutritional interventions," doctoral researcher Judith Baird, of Ulster University in Northern Ireland, and her colleagues concluded.

More study is needed to learn whether spreading out meals and snacks and/or the types of food consumed in the evening affect body composition and health, the researchers added in a meeting news release.

The U.S. National Heart, Lung, and Blood Institute has more on healthy eating.