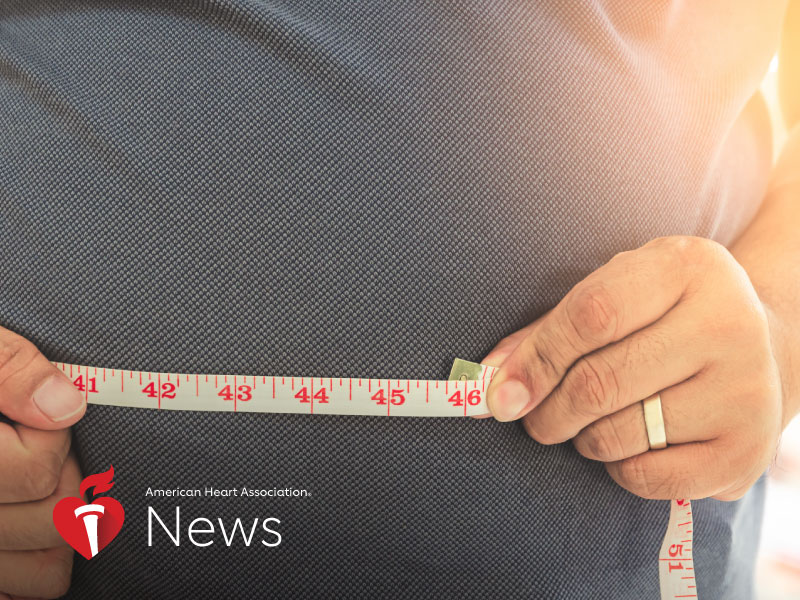 Among Mexican Americans, too much abdominal fat predicts the beginning of a buildup of plaque in the arteries called atherosclerosis – an early indication of heart disease. But new research shows this is only true for those who were born in the United States.

"From a clinical perspective, this suggests we should probably be targeting second- or higher-generation Hispanics with public health initiatives to improve their cardiometabolic risk," said lead author Dr. Susan T. Laing, a professor of medicine at McGovern Medical School at the University of Texas Health Science Center at Houston.

In the study published Thursday in the Journal of the American Heart Association, researchers used ultrasound to measure the wall thickness of the carotid arteries in 527 Mexican Americans living near the U.S.-Mexico border in Brownsville, Texas. They also used a high-precision X-ray, known as a DXA scan, to measure the amount of visceral adipose tissue, or fat deep in the abdomen.

Visceral fat is associated with atherosclerosis and heart disease, but much of the research about it has been done in non-Hispanic populations.

The new study in Mexican Americans showed those with the highest amount of visceral fat had the greatest thickening of the arteries, but the association was only true for participants who were born in the United States.

Heart disease is the leading cause of death among Hispanic adults in the United States, though most research fails to differentiate among Hispanic and Latino populations. In a 2014 science advisory, the American Heart Association called for more culturally tailored interventions for addressing heart health goals for this group.

Laing said her findings suggest U.S.-born Mexican Americans had been acculturated to an American lifestyle full of unhealthy, calorie-rich foods and sedentary behaviors.

"What we found among the Mexican Americans in this cohort was that the second or higher generations generally did not know how to cook and relied more on fast food, compared to their parents who had more traditional values and ate a lot of beans and vegetables," she said. "Second-generation Mexican Americans had fewer traditional behaviors that were healthier, whereas first-generation Mexicans who had moved to America held onto their traditional diet. This decreased with each succeeding generation."

Dr. Jorge Saucedo, an interventional cardiologist, said more research is needed on what happens after people from Mexico move to the United States.

"I think it's fair to say that the environment in America and the lifestyle here is affecting people," said Saucedo, a professor of medicine and division chief of cardiology at Medical College of Wisconsin in Milwaukee.

"In Mexico, if you are overweight, there might be some pressure to exercise. But here, there's not as much social pressure," said Saucedo, who also is medical director of the Heart and Vascular Service Line at Froedtert Health System. More time is spent on work, and "there's less focus on a healthy lifestyle."

Laing's research showed the link between visceral fat and atherosclerosis occurred regardless of a person's body mass index. BMI is a standard measure of overweight and obesity. While many people may be aware of their BMI, it is harder for them to know whether they have an excess amount of visceral fat, which may not give an appearance of being overweight, she cautioned.

"The more dangerous fat is the one that's hidden," she said. "You don't know if you have it or not. Your BMI may be normal, but you may have visceral fat and that increases your metabolic risk."

The way to reduce or prevent gaining visceral fat is no different than how to prevent other weight gain, Laing said. "You gain visceral fat through physical inactivity and a poor diet."