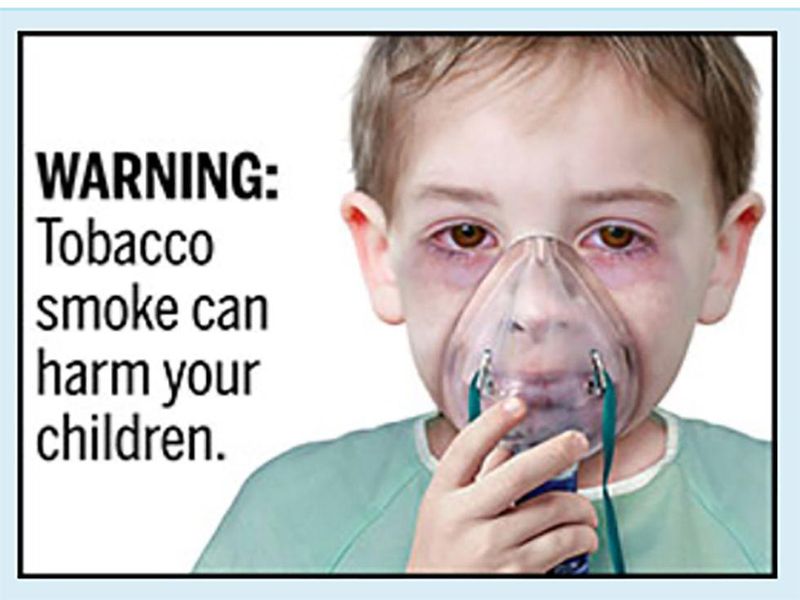 A pale boy with dark circles under his eyes, drawing breath through an oxygen mask.

Around 179,000 deaths in the United States might have been prevented over the past decade if smokers had been forced to confront such images every time they reached for a pack of cigarettes, a new study suggests.

Labels with graphic health warnings had been set to appear on cigarette packs in 2012, but tobacco industry legal action derailed that effort.

The warning labels are now scheduled to appear on packs starting next year, but the decade-long delay has cost tens of thousands of American lives, said senior author Rafael Meza, a professor of epidemiology and global public health at the University of Michigan.

"The evidence is out there from multiple countries that suggests these graphic health warnings do work as intended," Meza said. "If we had been able to implement this regulation back in 2012, many more lives could have been saved. This work shows the cost of industry litigation and procedures to delay implementation of tobacco regulations."

Meza and his colleagues project that more than a half million lives -- about 539,000 -- still could be saved by the turn of the century if no further delays occur.

About 120 countries around the world already have such graphic health warnings on cigarette packs, according to the Campaign for Tobacco-Free Kids. Canada became the first in 2001; graphic images now cover three-quarters of the space on their tobacco packaging, researchers said.

The U.S. Food and Drug Administration has a set of 13 graphic warning labels that would cover half of a cigarette pack's front and back. The warnings "stand to represent the most significant change to cigarette labels in 35 years," the agency says.

"These graphic cigarette warning labels have been proven to be very effective, especially at prompting current smokers to end their addiction because they're staring at that pack," said Erika Sward, national assistant vice president of advocacy for the American Lung Association in Washington, D.C.

Rather than lung cancer, the warnings focus on "other diseases that are perhaps not as top-of-mind for smokers when they are thinking about the health consequences of their addiction," Sward added.

For this study, the researchers created a simulation model of how graphic warning labels might affect smoking trends.

They took estimates from previous studies regarding the effectiveness of explicit warning labels, and applied those estimates to federal data about the number of smokers and smoking deaths in the United States.

If the labels do go into effect next year, the model projects that the percentage of people smoking in the United States will drop from an estimated 13.6% in 2022 to 4.2% by 2100.

Only about 12.3% of Americans would now be smoking had the warning labels gone into effect in 2012, the model's results showed.

In 2019, about 14% of U.S. adults smoked, according to the most recent data from the U.S. Centers for Disease Control and Prevention.

"When you think about a large country like the U.S., even if you can reduce prevalence by 1%, you're talking about millions of smokers," Meza said. "Just preventing a few smokers from engaging in the habit or helping them quit will result in considerable health gains."

These graphic label warnings would have added to other policies that have effectively curbed U.S. smoking, including tobacco taxes, smoke-free area laws, and bans on cigarette advertising, Sward and Meza said.

"This study really underscores why the tobacco industry views delays as wins, and why it's so important to move forward promptly with these effective policies," Sward said.

One of the tobacco industry's strategies over the years has been "delay, delay, delay," she said.

"The industry has delayed graphic warning labels for a decade now because they're putting profits over people's lives," Sward added.

She hopes studies like these will spur the FDA toward quicker action in other areas of tobacco control.

For example, the FDA said last spring that it would propose a rule to remove menthol cigarettes and flavored cigars from the marketplace, but nothing has been seen since, Sward said.

"That's kind of in the announced-but-not-acted-upon-yet category," she said of the April announcement.

Other actions being considered by the FDA and federal and state lawmakers include removing all flavored tobacco products from the market, imposing larger tobacco taxes, and funding a wider array of smoking cessation programs, Sward said.

Her group plans to support the FDA against any legal threat that might cause the graphic warning labels to be delayed again.

"The American Lung Association and our public health partners brought the lawsuit against FDA to compel them to move forward with the graphic warning labels as they were required to do under the Tobacco Control Act," Sward said. "Now we are working to support them fighting back against the tobacco industry."

The new study was published Sept. 24 in JAMA Health Forum.

The U.S. Food and Drug Administration has more about the proposed warning labels, including interactive examples.