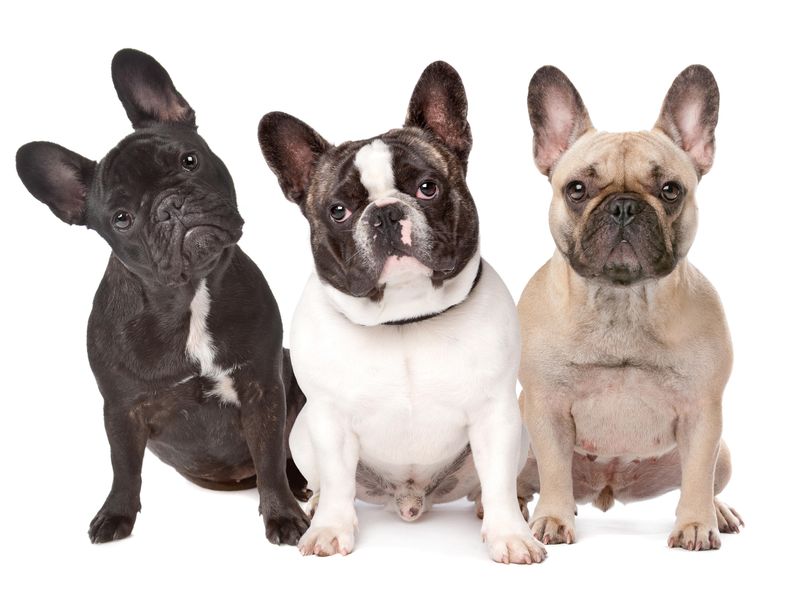 Unfortunately, the physical traits that make them one of the most popular breeds in the United States and United Kingdom also saddle them with a host of health problems, a new study shows.

Frenchies have significantly higher odds than other dog breeds of being diagnosed with 20 common canine disorders and illnesses, researchers reported Dec. 16 in the journal Canine Medicine and Genetics.

The most troubling health issues "are related to the extreme body shape of the French Bulldog," said lead researcher Dan O'Neill. He is a senior lecturer in companion animal epidemiology at the Royal Veterinary College in the United Kingdom. "These include breathing difficulties, skinfold infections, difficulty giving birth, eye ulcers, dermatitis and slipping kneecap."

The French Bulldog has been around for centuries, and was recognized as a breed by the American Kennel Club in 1898.

But in recent years they've undergone an astonishing rise in popularity, with a 20-fold increase in U.K. Kennel Club registrations between 2009 and 2019, making it the second most common breed in Britain, the researchers said in background notes.

The problem is that such heavy breeding has caused the genetic problems inherent in the breed to become even more pronounced, said Helio de Morias, hospital director of Oregon State University's Lois Bates Acheson Veterinary Teaching Hospital, in Corvallis.

"We are actively selecting for an appearance that is interfering with the welfare of the animal," especially the flat face that makes breathing difficult, de Morias said. "That, to me, is a problem. I think we should reverse that trend."

Worse off for nearly half of issues studied

To get a handle on how bad off the breed has become, O'Neill and his colleagues compared health records for nearly 2,800 French Bulldogs against more than 21,800 dogs from other breeds.

The investigators compared diagnoses for 43 specific disorders and found that Frenchies were much worse off for nearly half of the health problems tracked.

The problems directly relate to the physical traits that make the breed so cute, O'Neill and de Morias said. The snub snout is harder to breathe through; the skinfolds more easily become infected; the big eyes are more prone to corneal ulcers.

"The breed has many intrinsic health issues related to aspects of its conformation such as flattened face, lack of a long tail and short body. But the paradox is that humanity loves the look of these features, and this love is propelling the breed to become one of the most popular dog breeds in the world," O'Neill said. "So the features that we as humans love are precisely the features that are leading to suffering in so many dogs."

These problems aren't limited to the French Bulldog.

A recent genetic analysis in the same journal of 227 breeds revealed an average inbreeding rate of 25%, the equivalent of sharing the same genetic material with a full sibling. That level is far above what would be safe for either wild animals or humans, the researchers noted.

But the explosion in breeding caused by popularity of the Frenchie have caused the specific health problems to which it is predisposed to become even more pronounced.

Take, for example, the short snout.

"A lot of respiratory problems are because people are selecting for them. If you keep breeding what people want, you're basically making all these problems a lot worse," de Morias continued.

Steps are being taken to move the breed away from these health problems, O'Neill noted.

"The Kennel Club breed standard for the French Bulldog has recently been revised to emphasize the need to breed towards a longer muzzle and wider nostrils," O'Neill said. "This is a very positive step in a longer road to reduce the extreme conformation of these dogs."

Unfortunately, the gene pool for Frenchies is so small and so extreme that it will be difficult if not impossible to reverse these problems, de Morias said.

"To change some of those traits, you need to have genetic diversity within the gene pool of the breed," de Morias said. "For the English Bulldog, they don't think they have enough to reverse those genes. That might be a problem with the Frenchies as well, particularly with the explosion in the last 10 years. You didn't have a lot of dogs to start with, so they're probably all closely related."

There's some reason to hope: Researchers noted that the French Bulldog had lower odds of being diagnosed with 11 out of the 43 common disorders tracked in this study, including undesirable behavior, lameness and obesity. That means the breed has the potential to become healthier, they argue.

While vets, breeders and kennel clubs grapple with these issues, the best thing that consumers can do to help is refrain from buying breeds like Frenchies that come with a lot of gene-driven health problems.

"Until the body shape of the French Bulldog is changed to a point where the serious health issues of the breed are reduced substantially, the current advice for anyone thinking of getting the breed is sadly to stop and think before buying a flat-faced dog," O'Neill said. "The wider public can resolve this welfare crisis by just deciding to buy a healthier breed -- if we choose to."

You also might buy or rescue a mixed-breed mutt, although O'Neill warns that the dog won't necessarily be healthier than a pedigreed pooch.

"There are many benefits from deciding to get a puppy of a specific breed, such as the predictable size and temperament of the adult dog that you will later share at least a decade of your life with," he continued. "The important goal now is to identify those breeds with unacceptable health issues and work to mitigate these issues."

The American Kennel Club has more about French Bulldogs.