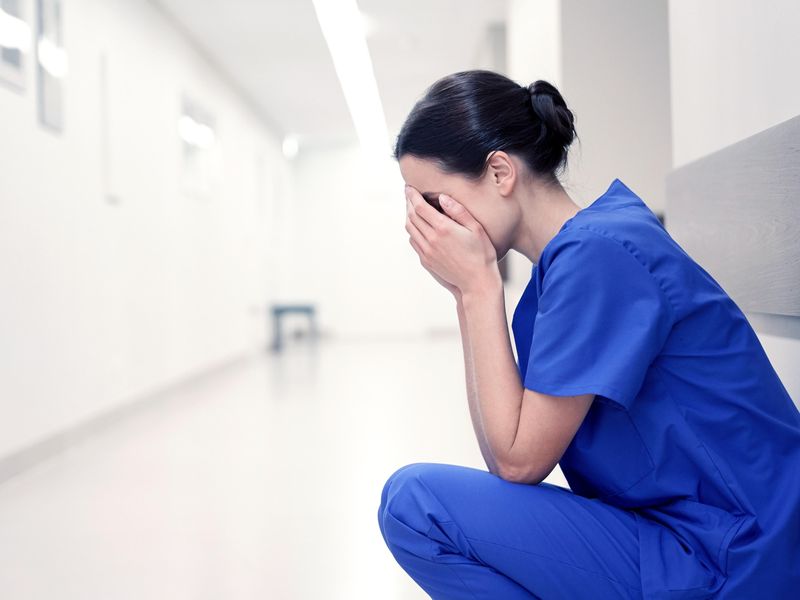 Hospital Work During Pandemic Was Like a War Zone: Study

Health care workers battling the pandemic may be suffering moral traumas at a rate similar to soldiers in a war zone, a new study suggests.

The pandemic has brought a stream of stories about overtaxed health care workers, facing repeated COVID surges, resource shortages and public resistance to the vaccines that can keep people out of the hospital. Workers' distress is often called burnout.

But the new study looked at a different concept called "moral injury." It refers to the damage done when people cause, witness or fail to prevent acts that violate their moral beliefs.

Moral injury was first defined a little over a decade ago, in military veterans who were scarred by their combat experience -- but in a way that was distinct from the anxiety, nightmares and flashbacks that mark post-traumatic stress.

"It's different from PTSD," said lead author Jason Nieuwsma, an associate professor of psychiatry and behavioral sciences at Duke University in Durham, N.C. "It's more about guilt, shame, losing your sense of identity, or feeling betrayed by authority figures when you're in a high-risk situation."

The bulk of research into moral injury has focused on military members. But in the past few years, there has been a growing recognition that moral injury also affects doctors, nurses and other health care workers.

"This didn't start with the pandemic," said Dr. Wendy Dean, co-founder of the nonprofit Moral Injury of Healthcare. But, she added, the pandemic has shined a light on the situation to the point that "we can't look away."

The nonprofit is working to reframe as moral injury what has long been described as burnout, and to identify its causes. What is clear is that medical professionals are not just overworked and fatigued.

"They all go into this knowing it's going to be hard. They know it's going to be exhausting," said Dean, who wasn't part of the study. "What they didn't anticipate was how hard it can be to get your patients the care that they need."

The roots of health care workers' moral injury, according to Dean, are in the health care system itself. Providers want to give each patient the best care they know how, but the business side of health care can erect barriers.

"Clinicians know what their patients need," she added, "but because of constraints beyond their control, they may not be able to provide it."

During the COVID-19 pandemic, existing issues were magnified and new ones surfaced. Health care workers may have seen care being rationed, their own safety compromised by lack of protective equipment, or had to enforce policies keeping family from visiting a dying loved one -- to name a few examples.

Still, research into moral injury in health care is in its infancy, Dean said, and there's a lot left to learn about its prevalence, consequences and solutions.

For the new study, Nieuwsma and his colleagues wanted to compare patterns of moral injury among health care workers with those of combat veterans.

They surveyed nearly 2,100 health care professionals who worked during the pandemic, along with 618 military veterans who were deployed to combat zones after Sept. 11, 2001.

Overall, the study found, the two groups were similar in reporting indicators of moral injury. Just over half of health care workers agreed with the statement, "I am troubled by having witnessed others' immoral acts" -- as did 46% of veterans.

Meanwhile, 18% of health care workers and 24% of vets said they were disturbed by having violated their own moral standards.

Those are signs of "potential" moral injury, Nieuwsma said. At this point, there is no agreed-upon threshold for defining moral injury, and it's not clear whether and to what degree study participants were impaired by their experience.

The study did, however, find broad patterns: People with potential moral injury tended to report more depression symptoms and poorer quality of life, compared to other study participants.

But moral injury, itself, is not something that's diagnosed. Dean said she was uncomfortable with the idea of seeing it as a psychiatric condition, when the issue stems from the system.

The fact that health care workers were often disturbed by others' actions is in keeping with the idea that a sense of betrayal can feed moral injury, according to the researchers. Health care professionals could have felt betrayed by authorities, colleagues or the public.

The longer-term repercussions of all of this remain to be seen, Nieuwsma said.

Dean made the same point, noting that 18% of U.S. health care workers have left since the pandemic's start. The degree to which moral injury is to blame, and the solutions, are not yet clear.

But a starting point, Dean said, could be for health care systems to acknowledge the problem and their role -- and assure employees "we're all in this together."

As for the public, she said, they could help by getting vaccinated against COVID, taking precautions during surges, and offering a "thank you" to health care providers.

The findings were published April 5 in the Journal of General Internal Medicine.

The U.S. Department of Veterans Affairs has more on moral injury in health care.