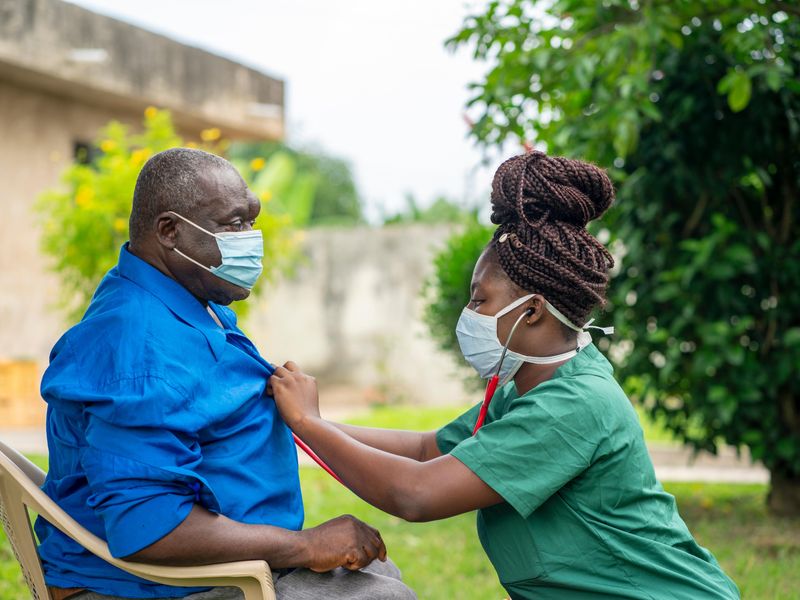 Black, Hispanic and Asian Americans have an increased risk of being diagnosed with dementia as they age -- for reasons that are not entirely understood, a large new study finds.

The study, of nearly 1.9 million older U.S. veterans, found that compared with their white counterparts, Black vets were 54% more likely to be diagnosed with dementia over a decade. That risk was nearly doubled among Hispanic veterans, who had the highest dementia rate across racial and ethnic groups.

Experts said the findings confirm a pattern seen in previous studies. But the veteran study was large enough to include better estimates of dementia risk among Asian and Native Americans, too.

It found that veterans of Asian heritage had a somewhat higher risk (20%) than their white peers. Native Americans, meanwhile, had a risk on par with white veterans.

The reasons for the findings are not clear, but they are likely multiple and complex, experts said.

And they would appear to go beyond racial disparities in access to health care, according to senior researcher Dr. Kristine Yaffe, a professor of psychiatry and neurology at the University of California, San Francisco.

She said one motivation for the study was to look at Americans who, in theory, had equal access to health care, as all were patients in the U.S. Veterans Health Administration.

The fact that racial differences still emerged suggests that access is not the issue. But, Yaffe said, there could still be disparities in the quality of health care that people receive.

One reason that matters is because certain chronic health conditions can raise the risk of developing dementia -- including diabetes, high blood pressure, heart disease and stroke. Preventing or effectively treating those ills could help stave off dementia.

Beyond health care, though, there are the "social determinants of health," Yaffe said.

That term refers to the wider context of people's lives and its impact on their health: If people face racial discrimination, are stressed over paying the bills, cannot afford healthy food or lack safe places to exercise, it's hard to stay physically and mentally well.

Social factors also include education, and over the years studies have consistently linked higher education levels with a lower risk of dementia. In the current study, Yaffe's team could only account for the typical education level in veterans' ZIP codes -- not their own attainment.

It all means that many factors, going back to early life experiences, may contribute to racial disparities in dementia rates, said Percy Griffin, director of scientific engagement at the Alzheimer's Association.

"This is definitely a complicated issue," said Griffin, who was not involved in the new research.

The study -- published April 19 in the Journal of the American Medical Association -- used medical records from nearly 1.9 million veterans age 55 or older who received care between 1999 and 2019. The vast majority were men.

Once researchers accounted for other factors -- such as whether vets had a history of high blood pressure, diabetes, stroke or brain injury -- race was still an independent risk factor for dementia. That was particularly true for Hispanic and Black veterans.

In contrast, being Native American, per se, was not linked to a higher dementia risk, versus being white.

That is somewhat surprising, Yaffe said, and the reasons are unknown. But, she noted, Native American veterans may be different from Native Americans as a whole, and it's not clear whether the findings would apply more broadly.

Yaffe also pointed to another issue: Studies have hinted that the standard tests used to evaluate memory and thinking do not perform equally for all races and ethnicities -- raising the possibility of overdiagnosis.

"If someone fails a certain screening test," Yaffe said, "that depends a lot on education, familiarity with testing, and English fluency. One could easily see biases around this. Someone might 'fail' the test and be considered to have dementia, but it may be due to some of these other things rather than a true failure."

More broadly, he said, it's time for action.

"We know disparities in dementia exist," Griffin said. "What are the steps going forward?"

He pointed to some that the Alzheimer's Association has been taking, including partnering with groups such as the National Hispanic Medical Association and faith-based organizations to increase dementia awareness among health care providers and the public.

Griffin encouraged older adults who are noticing changes in their memory to talk to their doctor sooner rather than later.

In addition, he said, a body of research suggests that "what's good for the heart is good for the brain." People can help protect their brain health through diet, regular exercise and managing conditions like high blood pressure and diabetes.

The Alzheimer's Association has more on protecting brain health.