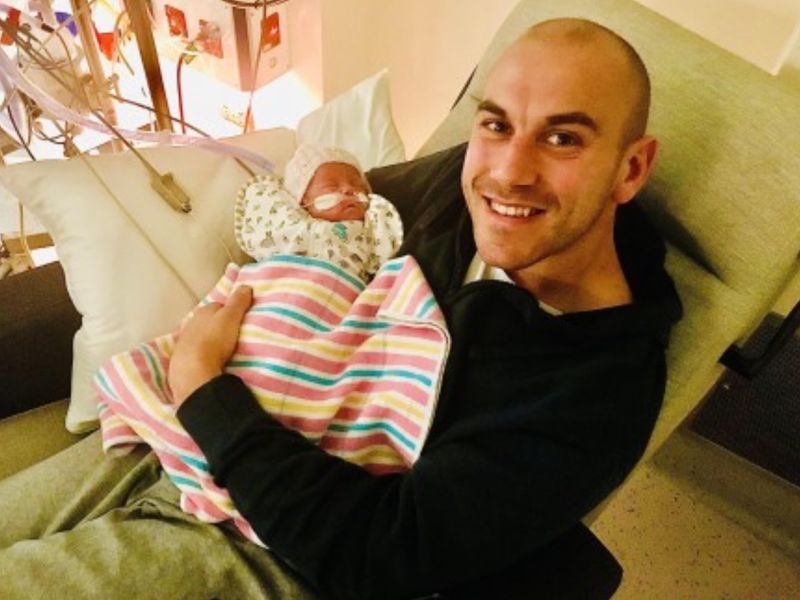 Decades of research have shown the power of skin-to-skin contact between preemies and their moms, but would the same technique, dubbed "kangaroo care," work with fathers?

Yes, claims a new Australian study that found when dads held their premature babies close to their bare chest, they reported feeling a "silent language of love and connection."

"It's like when your finger touches a fire, there are receptors there letting you know that it's hot," said study author Qiuxia Dong, a nurse and master's candidate at the University of South Australia. "It's the same thing [in kangaroo care], when the attachment happens between father and baby or mother and baby, it's just another reaction."

First-time father Joel Mackenzie experienced it with his tiny daughter, Lucy, when he was first able to hold her, two weeks into her time in the neonatal intensive care unit (NICU). Mackenzie explained that the NICU experience can be a really isolating one for parents, especially dads who are not often considered by the health care system when it comes to reconnecting with their child after a medical intervention.

"I felt like I was actively fostering her survival and her development by giving her a cuddle," said Mackenzie, who was one of 10 dads followed in the study.

The findings were published online recently in the Journal of Clinical Nursing.

One expert in neonatal care described how the bonding process works.

"There are biologic phenomenon that exist that allow babies and their parents to bond, and there are hormones that get released that allow you to fall in love," explained Dr. Robert Angert, a neonatologist at NYU Langone in New York City. "Those are stimulated by all your senses - your sight, but also your smell and touch. If you cut out some of those senses, you're going to miss out on those opportunities," he said.

"On the other side, you have anxiety and stress, and those make it harder to fall in love. As they describe in the article, a lot of parents, particularly non-birthing parents, are stressed and anxious and worried about the well-being of their child, especially a baby who's in the ICU," Angert added. "Bringing them together safely and in a way that's helpful to the baby reduces that anxiety to the parent."

Research has shown that during kangaroo care, the close contact activates nerve receptors in mammals that increase the production of hormones that lower pain and stress for both babies and parents.

The latest study illustrated that: Many of the fathers described the NICU environment as "overwhelming," but the ability to hold their children next to their skin fostered strong bonds and relaxed them, which helped build confidence and made them very happy.

"It was palpable how much of an impact it had on her," Mackenzie said. "Of course, it helped me in bonding with her and helping me understand her and what was good for her as a child, but also as well you could almost tell that she almost drew energy from us. She started to move better, she started to develop faster. I'd see her move better on a day-to-day basis. Eat more, be more responsive. Her eyes would open and move and engage more each time we took her out of the crib."

Having to separate a newborn from its parent for medical reasons isn't just traumatic for parents, it can have emotional and developmental impacts on the infant as well.

Angert said that "separation is an incredibly traumatic event in the life of a newborn, and I think we underestimate the impact that that event has on a baby. So we have an opportunity here to restore some of that togetherness, and it's not without good reason that we're taking the baby away. We're saving their life. But it's also good to think about when we can reestablish contact and allow them to give kangaroo care to their babies."

Parents who go through the NICU process have no doubts about the efficacy of staying by their child's side when they're sick. Mackenzie, whose child will celebrate her first birthday next week, said the bonding made all the difference.

"She still has mild lung disease and chronic cerebral palsy, but [the kangaroo care] part of her NICU experience was definitely a contributing factor to where she is now, I have no doubt about it," Mackenzie said. "Children who've gone through this experience definitely have a better chance of survival in my opinion."

To learn more about skin-to-skin contact benefits between parents and newborns, visit the Cleveland Clinic.