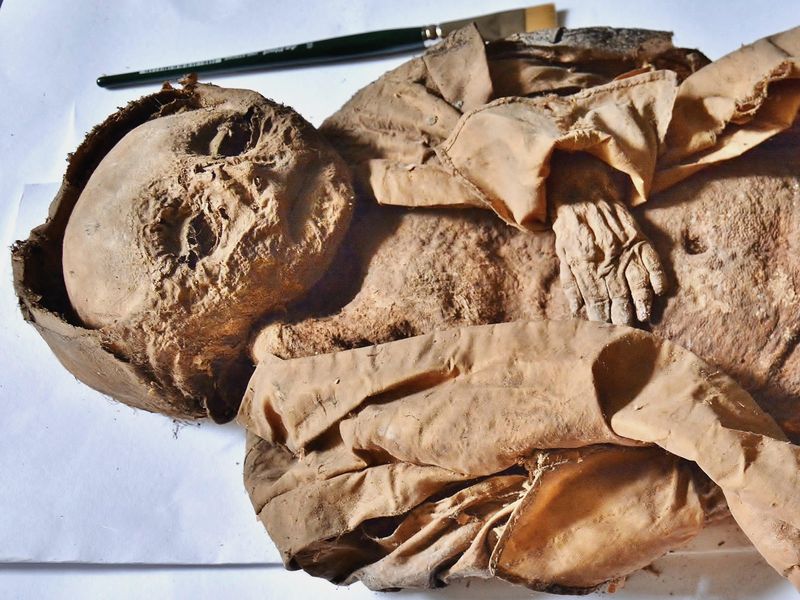 400-Year-Old Mummy Reveals a Nobleman's Child, Kept From the Sun

A “virtual autopsy” of a mummified 17th century Austrian infant has shed new light on Renaissance childhood — as well as the importance of vitamin D to health.

The researchers used CT scans to examine the remains, which had been found in an aristocratic Austrian family crypt containing the perfect conditions for natural mummification.

Analysis revealed that the child was a boy approximately 1 year old and overweight for his age, according to the German scientists

However, his diet didn't result in proper nutrition for a healthy body, creating a mystery for scientists.

The child had been stricken by severe rickets or scurvy, diseases that are driven by deficiencies in vitamins D and C, the scans revealed.

The child's rickets had caused his ribs to become malformed in a pattern called a “rachitic rosary.” Bone knobs formed at the ends of his ribs, creating the appearance of a chain of large rosary beads under the thin skin over his rib cage.

The scans also revealed that the boy had inflammation of the lungs characteristic of pneumonia. Since children with rickets are more vulnerable to pneumonia, the researchers speculate his nutritional deficiency might have contributed to his early death.

It appears the aristocratic son was not exposed to direct sunlight, which allows the body to create its own supply of vitamin D, said lead researcher Andreas Nerlich. He is a chief physician and pathologist with the Academic Clinic Munich-Bogenhausen, in Germany.

“The infant was lacking from adequate sunlight exposure that is required to convert pro-vitamin into functional vitamin,” creating a vitamin D deficiency that can lead to bone alterations such as those seen in the infant, Nerlich said. “So, although well-fed — even over-nourished — he was suffering from vitamin D deficiency.”

Today's infants are provided a much more balanced diet rich in vitamins and are not shielded completely from sun exposure, Nerlich said.

Examination of the child's clothing showed that he had been buried in an expensive silk coat that was long and hooded. He also was buried in a crypt reserved exclusively for the powerful Counts of Starhemberg, who buried their wives there as well as their title-holders, mostly first-born sons.

This means the child was likely a first-born son of a Count of Starhemberg. Radiocarbon dating and historical records indicate his burial likely occurred between 1600 and 1635. He was the only infant buried in the crypt.

All this led researchers to deduce that the infant in the silk coat was Reichard Wilhelm, buried alongside his grandfather and namesake Reichard von Starhemberg. The baby was buried in an unmarked wooden coffin, instead of the elaborate metal coffins in which other family members had been interred.

Historians will need to reconsider the living conditions of aristocratic infants, based on these findings, the researchers concluded.

“I think that it was a usual practice not to expose infants to sunlight as far as possible, particularly in aristocratic families — this at least comes from ancient reports from other families and images where infants were extensively covered by clothes,” Nerlich said. “So, this must not have been a singular practice in the Starhemberg family.”

The findings were published online Oct. 26 in the journal Frontiers in Medicine.

The Cleveland Clinic has more about rickets.