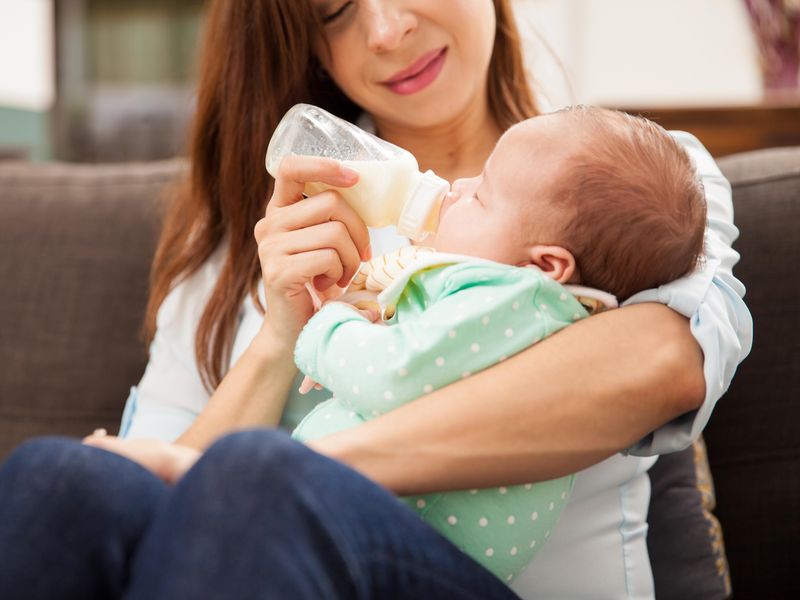 A nationwide baby formula shortage continues across the United States, with desperate parents scouring shelves to find nutrition for their infants.

Millions of babies rely on formula -- the only source of nutrition recommended for infants who aren't exclusively breastfed.

Two prominent pediatricians have advice for parents who are scrambling to find formula, offering a list of do's and do-not-do's:

The shortages are caused in part by supply chain issues, and pediatricians are concerned that fretful parents might make the situation worse by hoarding whatever they find on the shelves.

"I asked a mom today, 'If you saw three cans on the shelf, what would you do? Would you buy two and leave one or would you take all three?'" said Dr. Richard So, a pediatrician at Cleveland Clinic Children's. "I think the answer should be, take two and leave one for the next mom."

"You're really just harming someone else in the process when you hoard. I know that's hard to tell someone because when you're desperate to feed your kids and you have the resources, you're going to go out and buy what you can," said Wechsler, an assistant professor of pediatrics at Northwestern University School of Medicine and medical director of the eosinophilic gastrointestinal diseases program at the Children's Hospital of Chicago.

Do consider generic or store-brand formulas.

You might not be able to find your exact formula brand in the store or online, but by reading the labels of generic or store-brand options you might be able to purchase essentially the same thing you've been feeding your child, So said.

"Whether it's Walmart, Target, Sam's Club, Costco, those are just as good as your brand-name formulas," So said.

However, talk to your pediatrician before you substitute, if your option is very different from what you normally feed.

"If a parent is struggling to find nutrition, call your pediatrician about the best options," So said. "For example, if someone's on milk-based formula, soy would be OK if that's what they saw. Or if all they saw was a lactose-free formula, they could try that, buy a can of that, and it's not going to hurt the baby."

A discussion with your pediatrician is going to be particularly important if your child has specific nutritional needs, or if the alternative formula you're considering is designed for a baby with specific needs, Wechsler said.

"Sometimes, not all babies will tolerate a simple switch to any formula," Wechsler said. "It's really more of a concern if you're giving your kids a more broken-down formula in terms of the proteins -- not whole intact proteins, more like chopped-up peptides or even in some cases amino acids -- or if they're using a soy formula and switching to something that's now more milk-based whole protein."

Don't make your own formula.

The internet is flooded with do-it-yourself emergency baby formula recipes. Wechsler and So recommended against using any of them.

"It's not safe. Formulas are very, very physiologically balanced for a baby's body composition," So said.

Babies can develop electrolyte imbalances, nutritional deficiencies and weight loss if your homebrew formula is off by even a little, the pediatricians said.

By the same token, you shouldn't water down the formula you have to make it stretch. The risks are similar to homemade formula -- electrolyte imbalances and weight loss.

"The more you prolong weight loss, the more it limits growth and then, ultimately, if it's going on for quite some time, can affect brain development," Wechsler said.

Whole cow's milk, 2% milk or skim milk should not be substituted for formula in infants, or mixed in formula to make it last longer, Wechsler said.

"Formula is complete nutrition, similar to what you get with breast milk," Wechsler said. "Cow's milk is actually lacking certain things, and can affect the bioavailability of certain minerals. You can end up with things like iron deficiency from feeding too much cow's milk before 12 months."

The same goes for goat's milk, almond milk and oat milk, So said.

Don't use toddler's formula as a substitute for baby formula.

The U.S. Centers for Disease Control and Prevention has more about infant nutrition.