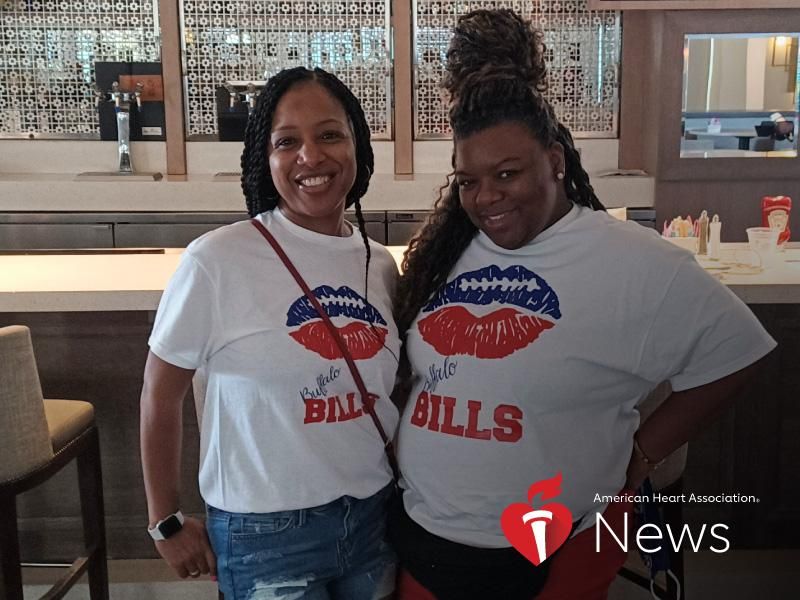 AHA News: Heart Failure at Age 30 Brought on By Pregnancy

Fatima Mathews knew something wasn't right. She was more tired than she'd ever felt in her life.

"You just had a baby," her doctor reminded her. "It's normal to be tired."

She'd been feeling tired -- and bloated and swollen -- since the last few months of her pregnancy. And now it was time to go back to work. Mathews told herself she'd be fine.

But she didn't feel fine as she tried to get out of bed that February morning, six weeks after giving birth at age 30. She sat on her bed for an hour, finally forcing herself to get dressed and head to the insurance office where she worked in Niagara Falls, New York.

She parked close to the front door -- just 400 feet away -- and resolved to push through the fatigue. "Ten steps in, I knew something was wrong," she said. "My face started sweating. My shoulder hurt. My heart was beating fast."

Mathews collapsed in a chair just inside the front door. When she finally consented to go to the hospital, tests confirmed her problem was indeed related to having a baby -- but not because being a new mom makes you tired. She had a rare condition known as postpartum cardiomyopathy. In her case, it left her in heart failure.

Doctors implanted in Mathews' chest a defibrillator, a small electronic device that monitors her heart rhythm and can correct any dangerous abnormalities.

For 10 years, the defibrillator did its job. Then the battery died. Replacing it should have been a simple procedure, said Theresa Giambra, who was director of the Cardiac Rhythm Device Clinic in Buffalo, New York, at the time and overseeing Mathews' care.

But Mathews didn't go home that day, or even the next one. When she was given fentanyl to dull the pain of the surgery, her heart stopped. She wound up in a coma, awaking more than a week later in a horrifying state of confusion.

"I remembered my mother and my children, but nobody else," she said.

Unsure what was happening to her, she fought with the nurses and ripped out her breathing tube, injuring her vocal cords.

When her head finally cleared, she had another shock: While she'd been in a coma, her family gave doctors permission to implant a left ventricular assist device, or LVAD, in her chest. It's a drastic step done when a heart can't properly pump blood on its own, often used as a way to keep someone alive until they can get a heart transplant, or as an alternative treatment when someone isn't eligible for a transplant.

Mathews knew she was a candidate for the device but didn't want one because the cumbersome apparatus would restrict daily activities and be difficult to hide. And Mathews, who enjoyed wearing cute outfits and going out dancing, didn't want to be permanently tied to all that equipment.

When she got home from the hospital, Mathews had to rely on others. She became frustrated and depressed and refused to leave the house.

"Usually, I'm the fixer," she said. "I fix everything for everybody else, but I couldn't fix this for me."

A physical therapist who came to the house pushed her to recover her health and her ability to function independently. Though Mathews hated the sessions, "if she hadn't pushed me, I would have stayed in a place of neglect," she said.

Slowly, Mathews regained her independence, and along with it, her mental health. She even found ways to camouflage the LVAD equipment, tucking it into fanny packs and working the ensemble into her outfits.

"It helped my confidence," she said. "I wanted to look a certain way."

Most of all, Mathews wanted to be there for her children. And now, with the LVAD keeping her heart pumping, she can be.

They go on cruises. They go to Disneyland. And, she gets together with her girlfriends. "I still go out and dance and go to parties. I still live," she said.

Mathews has expanded her social circle to include fellow LVAD patients.

She started with chatting up folks at the hospital where she had her procedure done. Now, the hospital calls her in to help give a patient's perspective.

"I talk to family, friends, anyone about what it's like to live with an LVAD," she said. "I tell them about the medications I'm on. How I live, how I sleep, how every night I plug up to the wall and put my batteries in a crate."

Then her doctor recommended she volunteer with the American Heart Association. She now shares her story at various events.

Giambra likes to call Mathews "Wonder Woman" because of all she has endured "with grace, strength and triumph" and her commitment to maintain a positive outlook and advocate for others.

"Even when she's getting horrendous news, she says, 'Oh I'm blessed. I just want to be here for my children,'" Giambra said. "I tell her, 'You need to be the face of surviving heart failure.'"

Mathews, now 43, realizes that going from anti-LVAD to LVAD advocate gives her a unique perspective.

"God has given me a second chance so I can help someone else," she said. "If it's just one person I help, I am thankful for that.