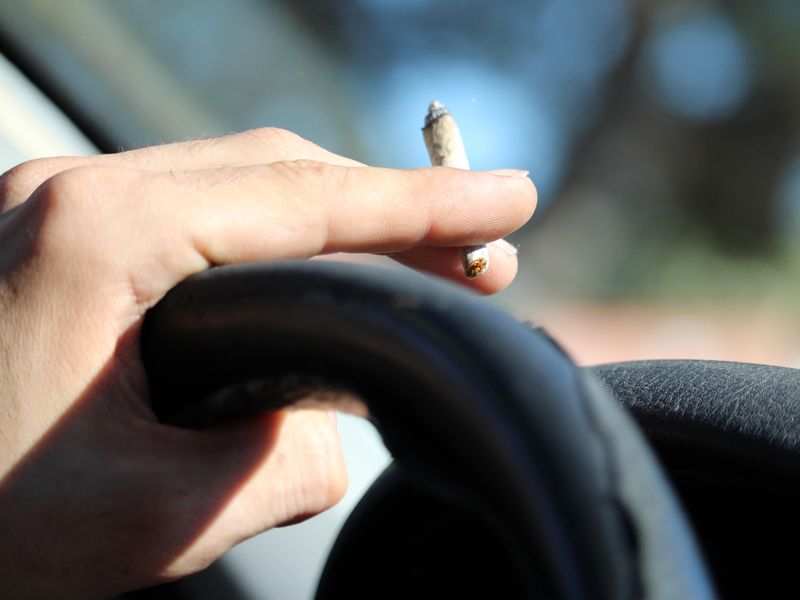 Here's more evidence that marijuana may make driving more dangerous: As pot has been legalized in more countries and states, a greater number of people are driving intoxicated by the drug and crashing, researchers report.

THC, the active ingredient in cannabis, has been detected in twice as many injured Canadian drivers since 2018, when cannabis was first legalized. The same effect is being seen in the United States, said lead researcher Dr. Jeffrey Brubacher, an associate professor in the department of emergency medicine at the University of British Columbia in Vancouver.

"This is an emerging and extremely important area of research," Dr. Nora Volkow, director of the U.S. National Institute on Drug Abuse, said in a statement. "One recent study found increased rates of motor vehicle crashes in the six months following medical cannabis authorization in Canada, and another study found relative increased risk of fatal motor vehicle collisions of 15% and a relative increase in associated deaths of 16% in U.S. jurisdictions where cannabis is legal," she noted.

"As more and more states seek to legalize marijuana, it is crucial that we understand the impact of legalization on addiction and a range of other health outcomes, including driving accidents, to determine strategies for implementing legalization while minimizing the potential harms," Volkow added.

Brubacher said how much pot is consumed before getting behind the wheel also matters.

"The increased number of drivers using cannabis, especially drivers with high THC levels (5 nanograms/mL or more), is concerning," he said. "But we cannot conclude that all of these collisions were caused by cannabis."

Previous research found no evidence that low THC levels (less than 5 ng/mL) are associated with an increased risk of causing a crash, Brubacher said.

"However, acute cannabis use causes cognitive deficits and psychomotor impairment, and there is evidence that drivers with THC levels of 5 ng/mL or more are at higher risk of crashing," he said.

These deficits lead to slow reaction time, lack of concentration and weaving down the road, Brubacher said.

"We know that the risk of crashing is higher in drinking drivers than in drivers who use cannabis," he said. "Some previous researchers suggested that cannabis legalization may improve traffic safety if drivers used cannabis instead of alcohol. Unfortunately, we found no evidence of a decrease in the percentage of injured drivers who tested positive for alcohol."

Volkow noted the effects of marijuana on driving ability are considerable.

"Numerous studies have demonstrated that marijuana significantly impairs many of the skills needed for safe driving, including judgment, motor coordination and reaction time. Studies conducted in a laboratory setting have also found a direct relationship between the concentration of THC in the blood and impaired driving ability," she said.

"However, this research must be interpreted with caution, as it can be extremely difficult to establish the causality for any given car crash. This is because -- unlike for alcohol -- there is no roadside test to measure drug levels in the body," Volkow explained. "This means that tests used to detect THC levels in drivers are often conducted hours after the crash. Further, marijuana can be detected in bodily fluids for days or weeks after last use, and drivers often combine it with alcohol, making it difficult to know how significant a role cannabis alone may have played in a crash."

For the study, Brubacher and his colleagues analyzed levels of THC in blood samples from more than 4,300 injured drivers who were treated at British Columbia trauma centers between 2013 and 2020.

Before pot was legalized, about 4% of drivers had blood levels of THC above the Canadian legal driving limit of 2 ng/mL. That percentage rose to nearly 9% after legalization, the researchers found.

The proportion of drivers with higher concentrations of THC also rose, from 1% before legalization to 4% after.

The largest increase was seen among drivers over 50. No significant changes in drivers testing positive for alcohol, either alone or in combination with THC, was seen, the researchers noted.

The percentage of those driving both drunk and high was about 2% before legalization and 3% after, the study authors found.

Blood levels of THC usually peak at around 100 ng/mL within 15 minutes of smoking pot. The levels then drop rapidly, to less than 2 ng/mL within four hours of smoking. After ingesting edible THC, the levels drop to a similarly low concentration after eight hours, Brubacher said.

Based on these data, he advises people not to drive for four hours after smoking pot and eight hours after ingesting it. Brubacher also cautioned that the combination of alcohol and pot can be especially deadly behind the wheel.

"Even though these numbers are concerning, and I think there is some reason for concern, it's not the sky is falling," he said. "It's not as serious a problem as it would be if we saw a doubling in the number of drivers who were using alcohol, because the risk is less with THC than with alcohol."

The same increase in marijuana use while driving has been seen in the United States in states where it has been legalized.

According to Paul Armentano, deputy director of NORML, a group that advocates for the reform of marijuana laws in the United States, "Similar increased prevalence data has also been reported in some U.S. states, like Washington, without a statistically significant uptick in traffic fatalities."

While testing for THC can be difficult, Armentano cautioned that people should not drive while feeling "high."

"NORML has a long history of calling for targeted public education campaigns regarding the influence of acute cannabis consumption on driving performance, and we believe that such campaigns ought to be part and parcel with any adult-use legalization law," Armentano said. "We also have a long history of calling for providing law enforcement with additional and more accurate tools and methods to both identify and discourage DUI [driving under the influence] cannabis behavior."

The report was published Jan. 13 in the New England Journal of Medicine.

For more on marijuana and driving, head to the U.S. National Institute on Drug Abuse.