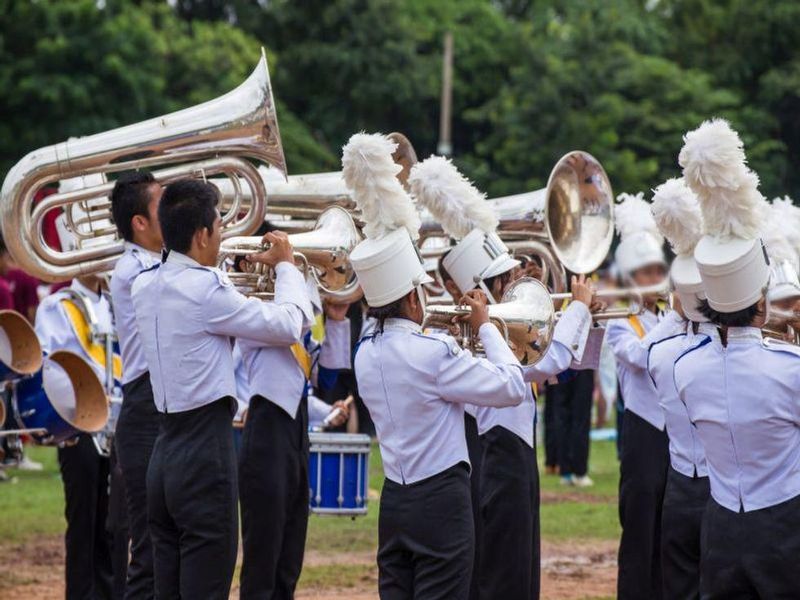 Kids in Marching Bands Under Threat From Heat Illness

It's not just athletes on the field who suffer when outdoor temperatures get too high. Members of college and high school marching bands are at increased risk of heat-related illness, too, researchers warn.

"They go out there, and they often wear these really heavy wool uniforms," said lead author Andrew Grundstein of the University of Georgia. "They practice many times for hours and hours outside. Some of them are carrying heavy instruments, and they're moving around a lot. There are a lot of risk factors that come into play for marching band members that people generally don't really think about."

For the study, Grundstein's team reviewed news reports of band members suffering heat-related illnesses between 1990 and 2020.

The researchers found that nearly 400 became ill due to heat exposure. About half were treated on site, but 44% were treated in the hospital and released the same day. The others suffered from heat stroke and needed more than one day in the hospital.

Most of the 34 events that caused the heat illnesses occurred during high school band rehearsals, parades and competitions, including one event that resulted in 35 heat-caused illnesses, the study found. Fifteen of those students were taken to hospitals. Because there usually aren't medics at band events, nine ambulances were needed to tend to all the ill students.

Certain factors can make the situation very dangerous. They include starting an event in the middle of the day when the sun is highest, wearing full uniforms and standing on artificial turf, which can get very hot.

At one competition, the weather was hot and humid, starting at around 87 degrees and rising to above 90 degrees, according to the study. Skies were clear, so there was no cloud cover to provide relief. Students were in the sun for more than an hour before officials finally moved the competition indoors.

"Think about the strain that puts on your medical resources, especially if you're around small towns," Grundstein said. "It's not like it's Atlanta where you probably have a pretty big base of those health care resources. And you had to call in nine different ambulances."

Because the study was drawn from news reports, the number of cases is likely an underestimate, Grundstein noted.

"This is a bare minimum of cases, but it still shows a real problem," he said. "In sports, you have an athletic trainer or coaches who receive some training in heat safety. They're keeping an eye on the athletes to make sure they're doing OK, and they're trained to spot problems. But the music director of a marching band probably hasn't had that training."

To protect students, schools and organizations can use guidelines like those used in the sports world, Grundstein suggested. They include giving students more breaks, encouraging them to drink water to stay hydrated and letting them wear lighter-weight clothing for practices.

Gradually increasing the time students practice outdoors would let their bodies slowly adjust to being in the heat. Schools should also consider training on how to recognize and treat heat-related illnesses, he added.

"Heat is going to become a bigger issue over time. We're already seeing these massive heat waves that hit the western U.S. this year," Grundstein said. "I think it's always been a hazard for marching band members, but it's going to be more of a hazard for all of us."

The findings were published recently in The International Journal of Biometeorology.

For more on heat-related illness, head to the U.S. Centers for Disease Control and Prevention.